I’m clearing out some post drafts that I wrote, shared on my Patreon and then promptly forgot to schedule to post on this, my actual blog. The others are just regular posts but this one is about something that happened over five months ago, so, ha. Whoops.

I went on a week-long camping trip for and around the eclipse, drew some stuff and then forgot about it until it was basically a million years since the eclipse, so who cares. Well, since it was less about the eclipse than camping and the coast, it doesn’t really matter. Here’s some vignettes from camping on the Oregon coast, in an area that is literally more familiar to me than the town I grew up in.

Chase had never gone camping for longer than a couple of days, which, I somehow got fourteen years without knowing that? It worked out, we did not die or starve (we sort of over-prepared), but the fire ban that was up to prevent any oopsies from the expected crush of tourists meant it was a super weird experience. There were no campfires! So, it just got really dark and very quiet kind of early. We played a lot of cards and used the heck out of a butane camp stove we bought last minute because I really didn’t want to believe I wouldn’t get to use fires.

There was a crow family! We watched them a lot, which weirded them out, I think. They took great advantage of how many folks were camping who didn’t know how to protect their food and we saw them with like, entire breakfast sausages in their perfect, stupid beaks. They did NOT like the whole “sun going dark” thing, but they did enjoy that the entire campground suddenly emptied out and people left their things out as they rushed to the beach to see the moon win a round.

Some animals, though, you literally couldn’t turn your fucking back without them getting up in your shit. 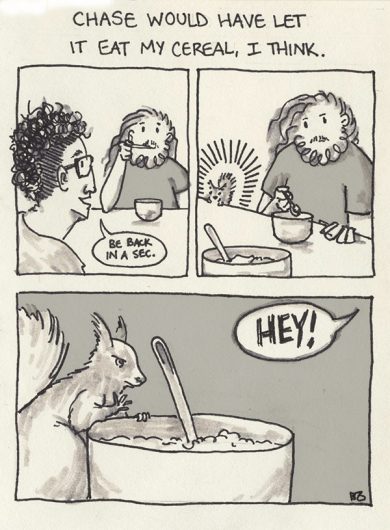 Squirrels are cretins. They’ll hold your eye contact while they try to steal something, but they don’t actually see you, like the T-Rex in Jurassic Park.

There were also no tourists. I mean, there were, but the mad levels of eclipse tourism that were expected were utterly absent. There were actually less folks about than we’d normally find mid-August. It made every sign we saw sad. Except for the price gouging ones. 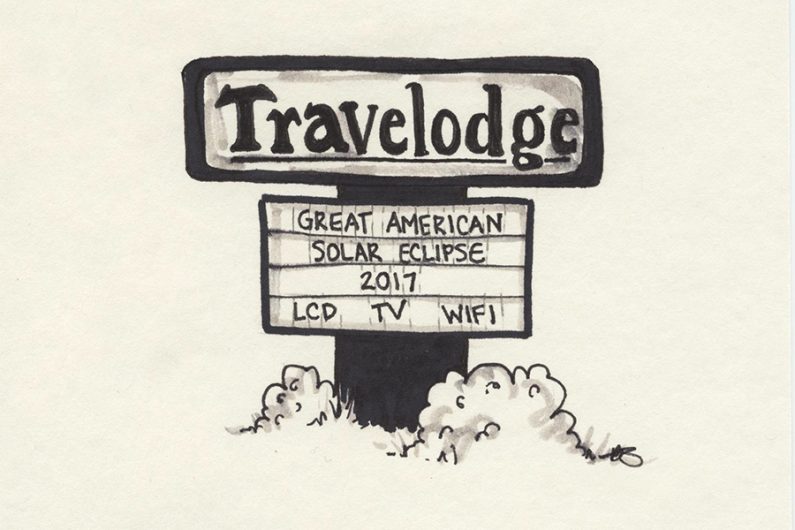 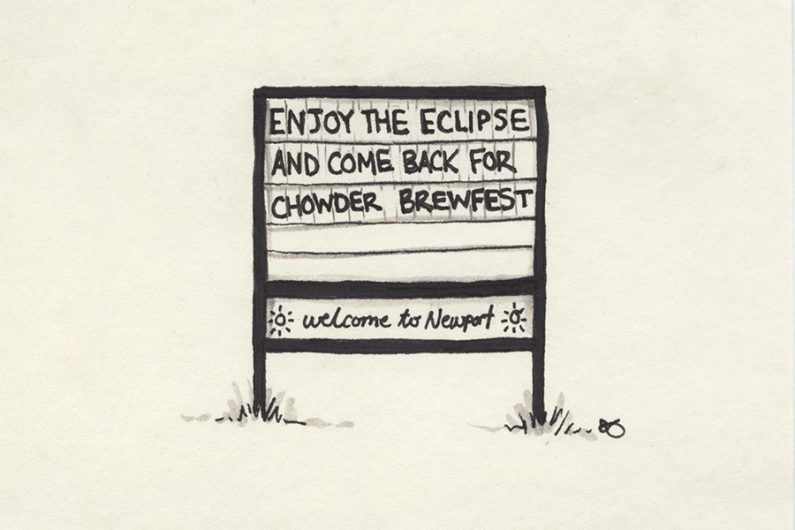 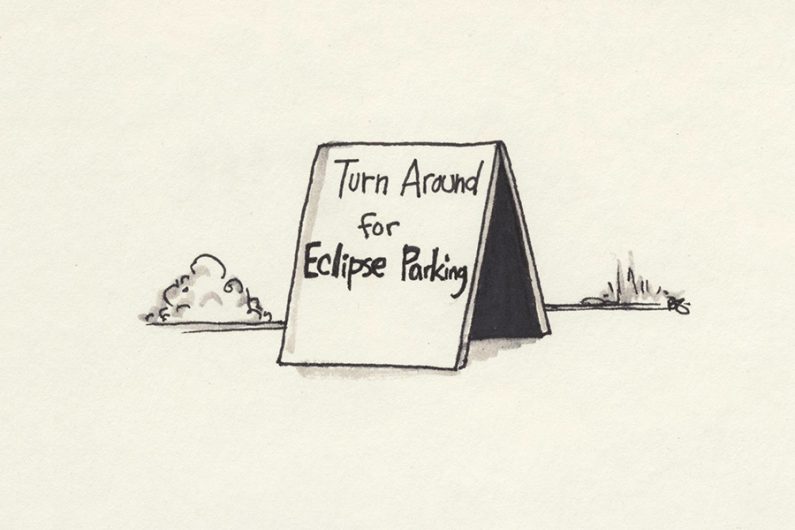 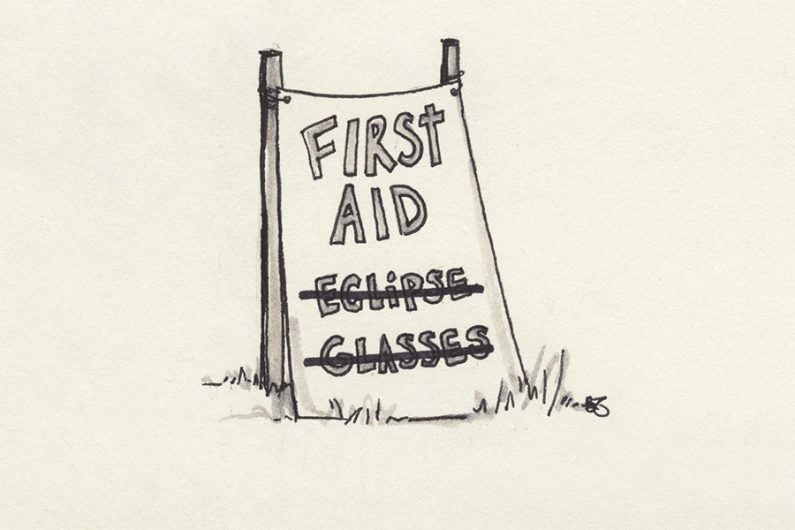 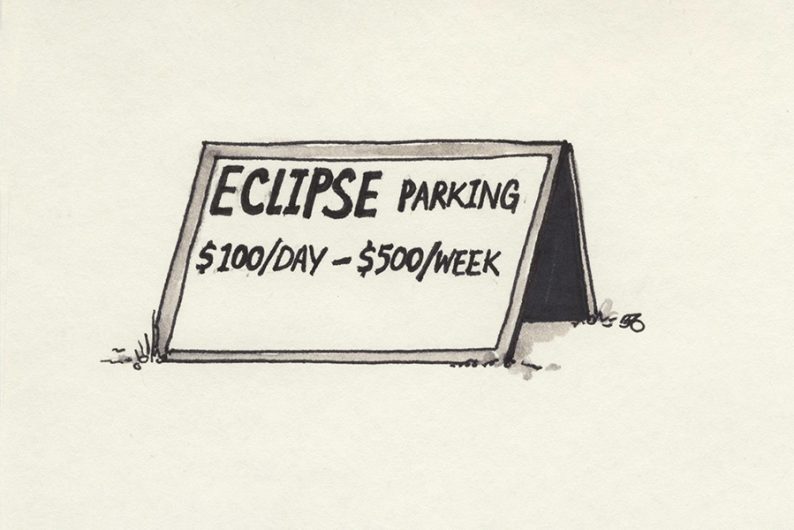 I’m super curious about what amount of ECLIPSE 2017 things are still sitting around, mad discounted. There were branded sweatshirts! We saw families all wearing them, it was the best.

The whole “sun going dark” thing was amazing (we were in basically the ideal path of totality), but just being at the coast was kind of enough for me. It’s one of the best places to watch people and look at weird nature things, like the merciless death that is that chunk of the ocean.

We were blessed before we even got to the campground by the camera guy from a local news channel trying to name-drop said news channel by saying their news van couldn’t fit under the drive through overhang. Which got the most stone-faced response of the drive through height. Yes, he agreed, that was too low for his news van. The baristas continued to not care and he just sighed. I hope you found someone stoked, camera guy.

I got no segue for this, but I love that camera phones exist and people take pictures all the time. I saw two great moments of that. The first was a lady trying to balance on one of the bonkers oversized-bike-shaped bike racks in Lincoln City, laughing, while a guy patiently held a phone to get a picture. Folks taking time and working with friends to keep their Insta poppin’ is one of the best things. 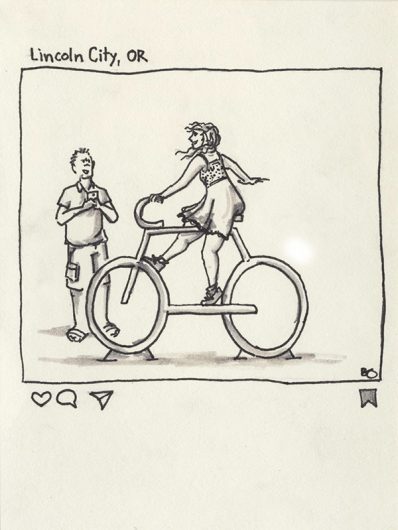 But, BETTER THAN THAT. We ate at a meh brew pub for dinner once we set up camp, because nothing else was open and we didn’t want to cook yet. There’s all sorts of junk in the window, as chain brewpubs have, and we watched three guys take group selfies in front of the big main window. They cycled who was in the middle! So now each of those three bros have a group picture they can be like “I’m the one in the middle” about. They took their time too, multiple snaps and repositioning, so I think they each got a really good shot. It was the sweetest thing. 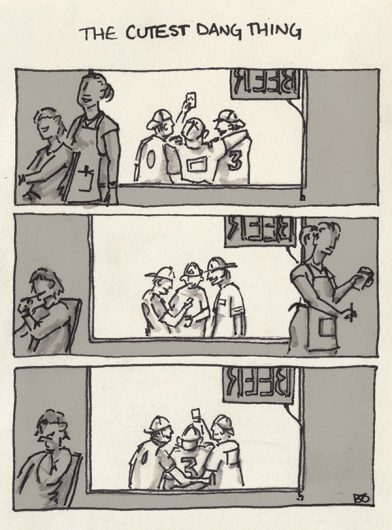 Overall, the eclipse was just one part of a really good week, and now we have all this long-term camping stuff and therefore no excuse not to do this more often. I also took a bunch of pictures, I collected them all in a Flickr album, like a caveman. 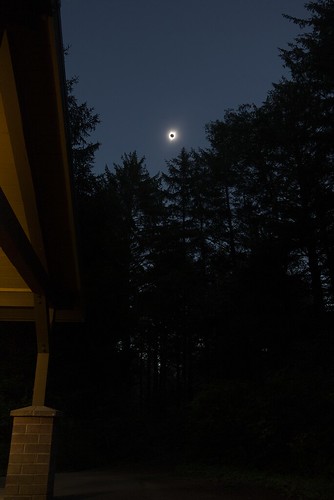 Decided a good way to spend some time and energy i

I’m this session of Dungeons, Dragons & Dives we

You may have seen these buddies in my stories as I

In this session of Dungeons, Dragons & Dives we pu

Got a walk in yesterday. Wfh and freelance is keep

I love how the weather here means you can keep but

On this session of Dungeons, Dragons & Dives New c

It’s been spring grey this week so thinking back

In this session of Dungeons, Dragons & Dives Reive

If you follow my insta stories you are aware I tak

Went to Huntington Gardens with two of the folks I

I don’t buy books very often because the library

In this session of Dungeons, Dragons & Dives: Gram

New written...¿thing? on my blog. Link in bio and