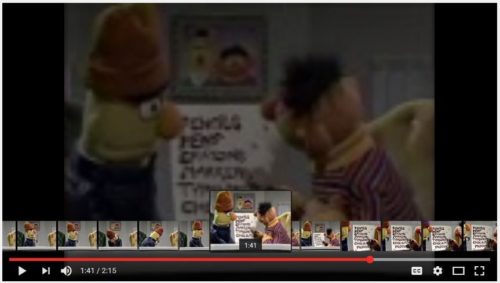 This is a repost from my Patreon, I’m testing a WP/Medium cross-posting plugin and also, I like this post.

There’s two defining bits of educational children’s TV that I still think about semi-regularly. One is Cotterpin’s Perfect Building, which basically has the moral “things must be destroyed to keep creating/destruction is part of creation.” I think I was barely in school when I read that book and it’s stuck with me since then.

The other one is this bit I remember from Bert and Ernie on Sesame Street. Now, the problem with remembering weird bits of children’s TV from the 80s is that you have to wait until some other obsessive uploads the thing you remember, so you can see if you’re remembering it right. I have a list of a handful of things that I do searches for every year or so, in hopes of finding an old favourite. I’d looked for this bit for years, trying all sorts of search terms to try and pin down this fuckaroo of a Bert and Ernie sketch:

And we finally get to the original thing, let’s say ink. So Ernie has used up all the ink for whatever task in this cycle. See, he would have used chocolate pudding, but they were out because he’d used it to write the shopping list. I remember my mind being blown, like, what the fuck even?! I’m in kinderarten or whatever and am presented with this untenable cycle of use with no end. It did a huge part in shaping how I think and what I think is funny.

I was recounting my memory of this skit to Chase the other day for maybe the hundredth time and decided to give the old YouTubes a search to see if I could find the skit. And I did. Here it is. But that’s not the skit I remember. This video, which I watched with a sinking feeling of unreality, shows Ernie writing the list in chocolate pudding simply because he dug through their prop box and found no normal writing utensils.

That’s it. No weird cycle that feeds itself, just a straightforward bit with a dumb punchline: “”He’s improving. Last time, he used spaghetti sauce.” And I know that it’s not that this isn’t the correct video. Every detail is right—Bert overheating in his coat, the typology of words written in chocolate pudding, how Ernie holds the paintbrush—except the actual setup and joke.
I’ve thought about this sketch since I saw it for the first time in 1988. So, I’ve spent almost thirty years ruminating on a totally fucked up misinterpretation of a children’s puppet sketch. And I honestly can’t think of something more on brand for me.