Clearly, I did not ultimately complete my project here.  After designing and posting five of my “final collection” looks, I posted no more.  Lots of things go into preventing a finish line from being crossed.  Having sewn twelve weeks straight, more or less, I was spent, pretty much.

I did have several more designs drawn, but never coloured them.  Nor, um, scanned them and I recycled the sketches.  Go me.  Here’s the only one that I did scan, just imagine the same sorts of colour families as before: 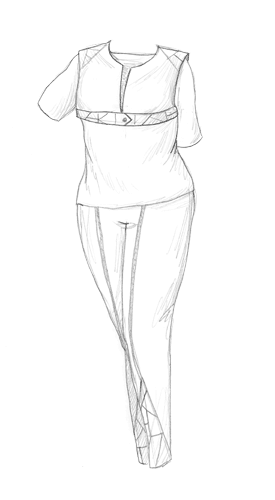 I also recently sorted through the pile of garments I made for this project.  With so much time passed since I last sewed on them I could view each piece more objectively, which was nice.  Immersing oneself in something highlights all the flaws.  I had quite a pile to go through. Of the twelve looks, I have:

Overall, I suppose failure is a harsh word.  I only skipped the one week of two looks, for legit reasons (life), but overall completed 85% of the challenges, and about 40% of the final thing, which is not bad.  I am considering it again for Season 8, despite inevitable burnout.  I learned a lot about sewing (and my level of contempt for “make a pretty dress” challenges) during the whole thing, so I think it’s worth it.

If you care to see me blather about fashion in general I do it at I Like Socks.  I’m pretty much obsessed with the tightening cyclical noose of trends.