Oop, it’s been a bit. Without the monthly focuses to keep me shame-tied to blogging, I’ve forgotten the habit. Though, to be fair, I’d been out of the proper habit for a while (which is true of most folks, it seems). What have I been doing. Hmm.

A big chunk of October was spent making San’s mask and cape (from Princess Mononoke) for a friend. I am a huge costume nerd and since they never drew San’s cape as actually attached in any way, that’s how I made it. It took an interior frame and counterweights, but it can be worn comfortably and easily, without exterior rigging, and look just like it does in the movie. I wrote, but not as much as I should. I got new tattoos, as part of a slow process in making my hands look amazing (nail art and tattoos are probably the best combo) and myself less employable outside the west coast. That was a good night. I got ink, some froyo then Chase and I went to see a pick-up (I mean, exhibition) Blazer game. That’s what we did instead of listen to the last debate, because that shit is easier to read about after. I like the crime-solving kind of forensics, not the speech ones.

Internet life has been a little weird because first an act of God ruined my mobile, Then Chase’s, which I switched to (as he uses his phone mostly) decided to up and die. At the same time, The Old Reader happened. Google Reader was super important to me and I keep poking around The Old Reader feeling the same kind of discomfort as visiting the place you grew up in—it is very similar but not the same, the same people are there, but not all of them and the dynamic is just a bit different

Plus my computer is shittier and The Old Reader is slower, so the 70-100 posts I’d see in a day is too much for me keep up with. I want this part of my online life back pretty badly, but there are some trust issues.

But at least I started reading again. Weird that I even stopped for like, months, right? I used to read a book or two a week. Honest books too, not just pulp. But writing while reading is hard and I was reading articles and doing crosswords and I don’t know. It got weird. But then the wonderful Jon Morris of Oh That Paperback (and like, one million other things) sent me a box of beautiful mass markets and a handful of 1970s’ Analogs. And you can’t turn that down, not an addict like me. From here it gets less fun and less pictures.

One morning a couple of weeks ago, my right leg didn’t wake up with the rest of me and it has stayed half-asleep since. Which is a little unsettling. Some would say terrifying and it’s one of those things where other people’s reactions make me feel like I’m conveying the issue badly. I’ll be all “It’s just numb and hypersensitive and yeah, from my lower back to all my toes but, hey stop freaking out. It affects ALL my toes, so it’s not a spinal disc thing.” But that doesn’t seem to calm people down. I can still walk on it guys! It’s just that when I put socks on it’s almost like I’m flaying skin.

Since even my distrust of doctors only extends so far, I finally went and got a general practitioner (the ONE doctor any of my friends could recommend, and he is fabulous), who gave me a referral to a physical therapist. And it turns out my PT went to the same school I did! Which, for med stuff, is actually a good thing. If I was looking for a chemist or a writer or something, that degree would be suspect. But PT? Totes. So now once a week I get to chat with a smart dude about Forest Grove and wine country while doing isometrics and trying to maintain a conversation while counting what set I’m on. And then each night Chase does nerve bombardment stuff, because the best way to deal with nerve hypersensitivity is to harass the shit out of a nerve system. According to Chase this means drawing on my leg (somehow ballpoint feels like liquid fire, who knew?). It actually does work, though. And not just at proving Chase is a jackass. 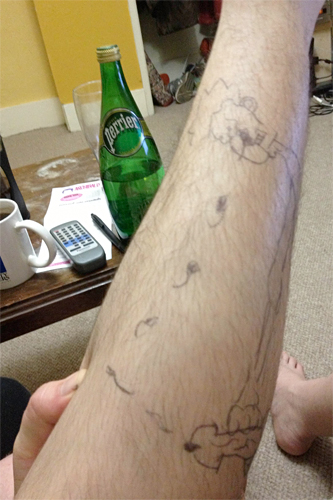 While I was levelling up as an adult by having a doctor, I had my GP take a gander at the thing on my left arm. Now this is a little embarrassing. From somewhere I picked up the gut-deep reflex that health issues are the result of being a terrible person—for me, that is. My health issues are because I did something wrong. Everybody else’s are because the world sucks. So having what is probably a cancerous growth on my arm would be what? Punishment for the sin of pride or vanity, I guess? But that’s why I never took pictures of it, even though I document about everything else.

Anyway, he razored it off and that was rad. I watched because I really don’t mind blood. I don’t. I find surgical process fascinating and if I was bothered by blood my female human body would give me some pretty regular issues. No stitches for this, just slicing off a medieval growth, dropping it in a jar and laughing genuinely while using an electrocauteriser when I drew parallels with Luke (Skywalker, like I have to even specify) getting his hand cut off by a lightsaber.

Of course, then after the test results came back I had to go and get more stuff removed, because cancer is cancer, even if it’d take like 10 years for this particular one to make legit trouble. A football shaped cut was made around the scab from the week before, arcing long and wide to make sure that all the bad shit was cut out. I joked about the gussets Buffalo Bill cut in Silence of the Lambs, adding that “to my credit, I thought of sewing, then serial killers.”

I watched the process again, except for the bits where the scalpel first bit into the skin, because the combo of a blade pushing into skin until it cuts through just grosses me out. Also, the stuff right under the skin is pretty gross, but also very Cronenbergian, so it’s like 50/50 don’t look. And all was good (and crazy interesting!) until he started putting in stitches and I got hella faint. Which is super embarrassing, like most things where your body makes a decision without your brain.

They laid my chair back and I closed my eyes and got the doctor to explain involuntary vagus nerve action regarding fainting while I waited for my blood to work again. It is just a thing! A very annoying thing. So I didn’t even get to see how many stitches I got until I took a picture to send Chase at work. At least it should scar neat.

5 Thoughts to “Also, Chase was a kitty for Halloween”