And with that, we went and bought something fancier than we imagined we could.  And got a hell of a deal.

It’s the 2013 Veloster. VELOSTER. From the first time I saw a picture of its stupid face I was taken. Then Chase showed me this banned Dutch commercial:

Yep, it’s got three doors. To fuck with Death.

Somehow, we thought the price we were looking at was for the base model. But it turned out that the car we were looking at online actually had a fancy package that added a crazy nice stereo and a sunroof. And leatherette seats. So we ended up with a car that gets at least 40 miles per gallon on the highway, in a low-moderate price range, that feels like a luxury car inside. And looks like a space ship, a little.

Oh, and there is a touch screen inside? 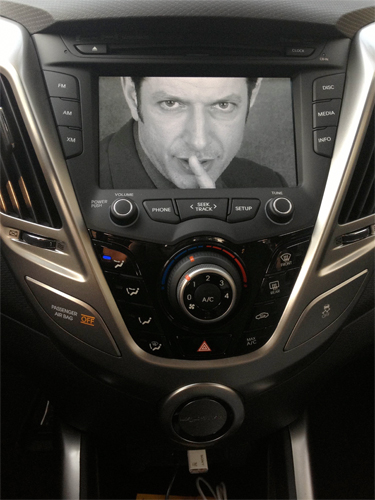 We named him Jeff.