One of the more truly exciting things for me in any project is the packaging and design aspect of it. I just like thinking about how to sell things visually. So, as a present to myself, and as a reward for hitting a writing goal on the sequel to The Audacity Gambit, I spent some time thinking about the cover.

The cover I made for the second draft had the basic imagery I wanted. I made a little arbour (like the one Emily passes through) out of paper and Chase and I set it on fire and took pictures. It’s cute and I liked the particular sparseness of it.

When I sent out reader copies for the latest version, I used the same image, just marked up.

But I wanted something bigger and better for the cover for the final version. I wasn’t going to build like, an actual arbour and light it on fire, but luckily there were doll house versions out there ready to use. Now, I love the shit out of miniatures. I love putting them together, I love accurate scale, the fiddliness.

I spent an untoward amount of time browsing doll house sites, looking for just the right arbour. The Audacity Gambit is set in the 90s, in a trailer park, so it couldn’t be a frothy Victorian thing. I finally found THE PERFECT one, over at the delightful True2Scale.

Only, I realised before confirming the order. It was 1:48 scale. For those of you not conversant with doll house scale, that’s one fourth smaller than regular doll house furniture. Most doll house scale is 1:12, where each inch equals one foot. In 1:48 scale (or quarter scale), one quarter-inch equals one foot. I wasn’t sure if we’d be able to get the images I wanted on something that small. Plus, I wanted the charred remains for the cover for the sequel and there might not be much left of something so small.

So I kept looking. Eventually I found another good option, over at Tiny Dwelling, on Etsy. It wasn’t quite the shape in my head, but it was probably a more accurate type of arbour for the setting anyway. I ordered it and then, in a fit of indulgence, also ordered the tiny arbour.

When the 1:48 scale version arrived I spent the evening putting it together. Laser cutting has totally changed the game for doll house items, guys. It was such a pleasant, absorbing task and it looked so wonderful all assembled. I knew it wouldn’t survive the flames, but whatever, destruction is part of creation. 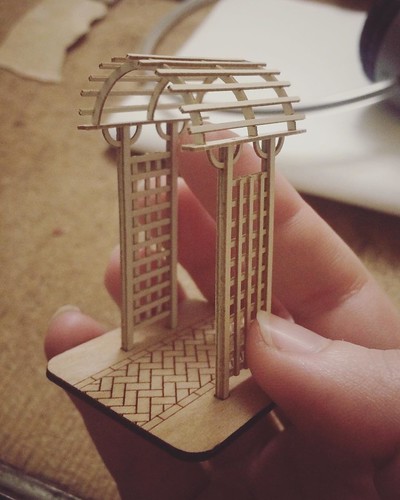 After a couple of days, the other arbour hadn’t arrived and I was worried. I wanted to get going on the cover! So I checked my transaction again and realised something: I hadn’t ordered a kit. I’d ordered a pre-assembled item. Which not only meant that I would have to wait another week to get it, but that I was going to light on fire something someone else had made. When it finally arrived it looked so perfect. The weathering was spot-on, it was a great piece. And I was going to light it on fire.

After some debate, Chase and I decided to light both on fire and decide in post which arbour works best. What happened behind the scenes of that shoot went up on my Patreon.

I know that this doesn’t scream “New Adult Fantasy Novel”, but honestly the story doesn’t either. Besides, the arbour isn’t the only thing going on the cover this time around. I’ve got plans.