Right!  Focus month of embroidery, which I was—am—very happy about.  But I hadn’t fully realised something after ‘finishing’ last month’s focus. Chase’s show is still in production and though it’s not 100% of my focus right now, it’s definitely at least 50%.

So what I’d wanted to get done this month—four pieces using techniques I’d not tried before—has ended up being halved. But I also produced things (that I still can’t share, as much as it pains me) for Chase’s show too.  But here are the official focus month of embroidery pieces.

Sequins! I have oh-so-many sequins. I never use them, because sewing on sequins well is a huge pain when working in large areas.  Not so big a problem for small areas though! And the second piece, when in doubt: Minotaur! 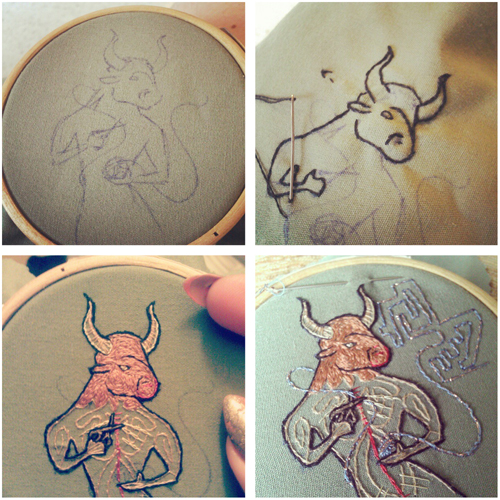 Mostly, I wanted a face to work in the stitching technique I found on Opusanglicanum. The rest is sloppy split stitch and sparkly thread from the fabulous Chronographia. Both pieces were done in a 3″ hoop (received with the sparkly thread) and I’m not sure what I’ll do with them. As per usual.

Next month I’ll go into knowing that I am still heavily involved with show production, which’ll hopefully keep that less work/guilt/less work cycle from happening.