Okay, new month, new focus. You may know that my partner is a photojournalist (and has been the photo department of the weekly he works at for almost six and half years), but you might not know that I very nearly went to school to do the same thing. I was super active in the newspaper in high school, we had a 12-16 page weekly (with spot colour!) and I was one of the two photographers. I job shadowed with the Oregonian, who dropped me like a hot stone when I went to college and told them that the journalism program at that school was crap and I’d probably be doing a fine art photography emphasis instead.

It’s okay though! Because old-school journalism is a depressing, dying thing that doesn’t know how to adapt and I’m happy with the choices I made. But, point being, I’ve been shooting since I was fourteen (that’s almost a decade and a half now). I used to spend hours in the darkroom during my vague independent courses, laying the base for the weird love of doing post-processing that I have today. The technical bits of photography aren’t my bag, that’s Chase’s thing. But I’ve almost always taken pictures. I love documenting (having a spectacularly horrible memory encourages that), I love the worlds that are created in within the bounds of an image, and since I’m a whore for process, I love the process of shooting and editing. I like to make things and then see them twice removed in an image. I like going to a bunch of trouble to take a shot as much as I do seeing something hilarious and shooting it quickly. 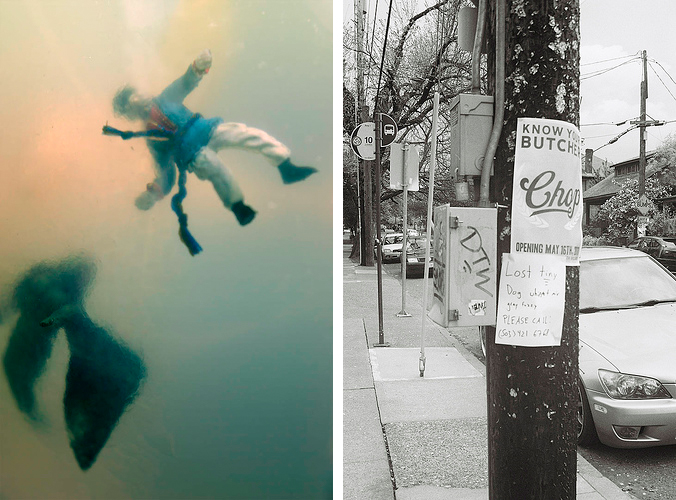 In 2004 an acquaintance gifted me with a membership to this new thing called Flickr. I jumped aboard and, as is my process, threw everything up online as I learned and made and fucked around. Sometimes things would get crazy popular, like the monoggle, or that papermaking tutorial. There’ve been well over a million views to my silly little Flickr shots in total, and the stuff I’ve tossed up there is the primary reason people know who I am, or introduce me as someone who “makes things.” The current “most interesting” (ie: not necessarily most viewed) image in my Flickr stream, which has been viewed 5,962 times

But 50% of making something for me, of anything I make or have made, is so I can take a picture of it when I’m done. And I’ve taken a lot of pictures since 2004, as this Pummelvision thing attests.

My Pummelvision from B. Zedan on Vimeo.

So this month’s focus is photography. I have three projects that need to be finished (they’re all in different stages of doneness) and a nice daily goal. I’ve gone through my Flickr archives for June, from 2005 to 2010 and pulled a picture from each day into ten sets of three. Every day I’m going to snap a shot that references or relates to the archive photo. As each set of three is done I’ll post it here.

Photography has always been a way for me to stand outside and take things in, to process and actually see. I need that right now, so here we go.