A precious few of you may remember the first iteration of The Audacity Gambit. Serialised online and barely edited past first draft, the book was born out of a personal challenge to write something long form. What I said when I’d finished that version of it was:

At the start of this year, when I started this focus thing, my focus was writing—specifically, getting some significant headway into a book. The longest finished piece I think I’ve ever written was a little over 4,000 words long.

I wrote it to fill a gap that, as an adult, I realised had existed in my life as a teen. As a mixed-Latinx kid who lived in a poor ex-logging town, I didn’t see myself in stories I read. The world, beliefs and people I knew then and as an adult weren’t things I saw reflected often in media in general.

The elevator pitch I gave it at the time was “An existential fairy tale where everybody already knows what’s coming.” Not a great pitch, but true. I wrote the outline with TV Tropes close to hand, because I wanted to take the bones of things I was familiar with and build something else. 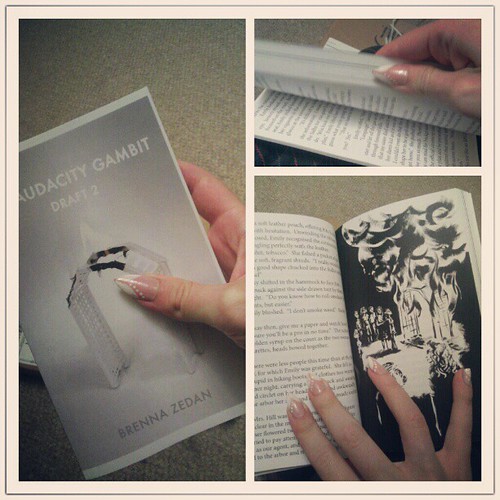 The finished version of it at that time was around 38,000 words long. Not quite a novel. That was somewhere in 2011. It lived online for a long time, long enough that when I sent out queries after the first couple of edits I got rejected for “previously published work.” I mean, I probably got rejected for more reasons than that.

I can’t remember when I pulled The Audacity Gambit down. It wasn’t just in response to those rejections, but that the version I’d originally written was so dang raw. So, I did all the things I was supposed to do. I edited. I filled it out. I had people read it and considered their feedback. I went back through and made sure it was clear that my main characters aren’t white (shout out to the invaluable Words For Skin Tone at Writing With Color). And, I kept submitting, to agents, publishers, those hashtag pitch fests on twitter.

And, I kept getting rejected. Which is fine! Listen, the main character smokes, there are lots of swears, they’re the reflection of what being eighteen was in a particular kind of poor small town in the 90s. The story isn’t inspiring and is kind of a bummer. Lots of good reasons!

But, listen. I really loved this story. And the folks I had as readers over the years, they loved it too. Plus, I was working on the second book already, which I was even more in love with. Fuck it, I figured, why not self-publish?

There are lots of reasons not to self-publish. It feels like vanity publishing, it’s a good way to feel shitty about yourself when nobody reads or buys your work, maybe you should write something better. Whatever. After some thought, I figured I didn’t care. This dang story was still haunting me years after finishing it. I know the value of my own work, and that it was worth sharing.

I did a big ol’ read through and final pass, it’d been probably a year since I’d read it all the way through. I still liked the fucking thing. The distance of time made editing a pleasant task and I tightened up and smoothed out what needed it, bringing it to something like 43,000 words, more of an actual book length. Once I got the manuscript to a place that felt truly done, I sent it out to some of the folks who’d been my readers years and years before. 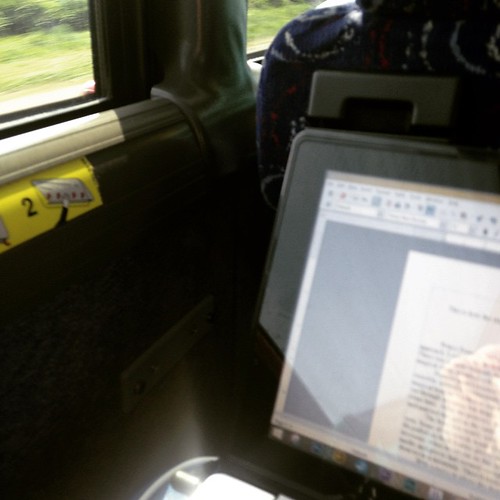 I got feedback from them and applied it. Then I did the scariest thing. I contacted a friend of mine that works as a copy editor and asked her what rates were. Bless the Editorial Freelancers Association, there are standard rates for copy editing. I looked over the numbers and gave it some hard thought. Did I believe in The Audacity Gambit enough to pay a big ol’ sum for it? And the answer was yes.

I’m way too much of a picky bastard to make people pay to read a book that hadn’t passed under the eyes of someone with professional level grammar and spelling skills. Besides, I wanted to do this right. And I am so grateful I did. Not only did a wealth of things in need of fixing get found; but I lucked out amazingly in finding a copy editor that is not only a complete joy to work with but was able to read tone and intention in a practically magical way, fitting my writing voice perfectly.

When the copy editor asked for a pitch/quick summary, I floundered. I ended up scraping into old PitMad drafts and rejected queries and pieced together this:

Every teen hits a stretch in life where they feel like they’ve been forcefully isolated from the world. The standard fantasy trope is that it’s all for a reason—they’re the Chosen One. They’ve got to save their village, rescue a princess, find the key. But 18-year-old Emily’s village is a trailer park and the people she’s fighting for may have performed more terrible deeds than the enemies she’ll have to confront.

With little choice in the matter, Emily plunges head first on a quest into a fairy world that isn’t nearly as fabulous and fantastical as books would lead you to believe, though it’s a nice enough place for a vacation. Her journey outward is relatively easy, as befits a Chosen One. As she reaches her goal Emily learns things about herself, and the people she considers family, that will colour her outlook forever. Then, when she returns to the mundane world, she learns just how much things have changed.

Ugh. I write copy for a living, you know. But I still can’t quite crack this one. Now, if it was a friend’s romance book or something and they needed a back-cover summary, I’d have it written in a blink. For me, the hardest thing to sell is myself. But I’m learning!

For example, I have a Patreon. Since I work in multiple disciplines, there’s quite the scramble of things on there, but it acts as my production blog for whatever I’m currently working on. As I piece together the self-publishing process, I’ll be posting there quite a bit.

Of course, I gotta post here, and elsewhere, about it too. I’m used to shouting into the void, but this time I want the void to hear me. I’ve got a book coming out, and I’m fucking proud of it.

4 Thoughts to “(Re)Introducing The Audacity Gambit”