A while ago I posted something on Tumblr about defining family that has since been reblogged a whole hell of a lot. It’s always interesting and heartening to see people’s comments and responses as they reblog. This one is new to me, though (link to post, which has auto-play music): 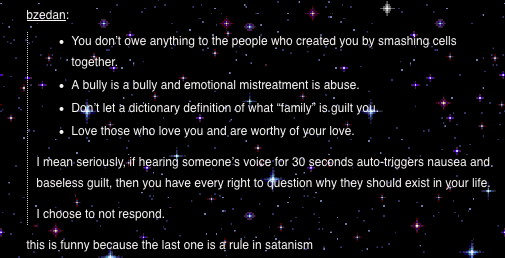 My personal beliefs are as mish-mashed as my ethnic identity and there’re big enough chunks of things that I may look all of one at first glance. One of those chunks is existentialism. And it’s a good part of Sartre’s “existence precedes essence” that applies for me when defining my family and myself. From Existentialism is a Humanism,  a lecture by Jean-Paul Sartre in 1946:

Man simply is. Not that he is simply what he conceives himself to be, but he is what he wills, and as he conceives himself after already existing – as he wills to be after that leap towards existence. Man is nothing else but that which he makes of himself. That is the first principle of existentialism. And this is what people call its “subjectivity,” using the word as a reproach against us. But what do we mean to say by this, but that man is of a greater dignity than a stone or a table? For we mean to say that man primarily exists – that man is, before all else, something which propels itself towards a future and is aware that it is doing so.

But really any “left hand path” variant that asks people to actively shape the world they live in applies. Like the Unseelie court! Oh yeah, dark fairies, guys. Maybe a little bit of an influence in the fantasy I write. Maybe.

However it rolls for you, I do think it is key to learn to say “no” to folks who hurt you, who aren’t worth your time.